Gay Boy Scouts, or Macho Militarist Moralism is for Everyone

Well, the Boy Scouts of America (BSA) have officially changed their policy prohibiting membership to openly gay boy scouts (which assumes, I suppose, that all boys between the ages of 10 1/2 years old and 18 years old have complete and final "sexual orientations"). 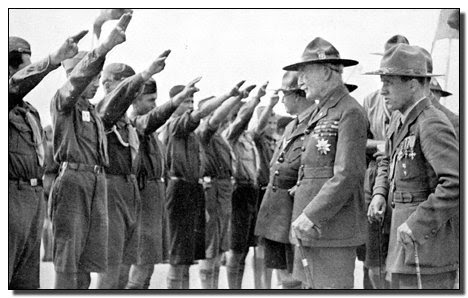 I know this is being lauded by gay rights activists, and I am more than familiar with the rationale, given that I have closely followed the same struggle for full inclusion into the armed forces during and after a career in the Army. That's not what's on my mind today, however . . . the rationale for fighting for full entry into either the BSA or the United States Armed Forces. I'm more interested in what was "won" for those excluded and how that gets set aside from the advocacy for or opposition to full inclusion in both.

Been away for a while, as all five of you who read this blog may have noted.

I'm writing a book. A kind-hearted publisher decided to give me a shot at a book on gender, war, and Christianity. I was so excited at the prospect that I made crazy promises, like the one to deliver a manuscript (which is running at around 600 pages - or 450 in real book pages) by the Ides of March 2014.  Nuts, I know, but sometimes deadline discipline is a Good Thing with someone who loves procrastination as much as I do. So that is where I've been . . . researching, writing, rewriting, re-researching, and when the neurons are fried, gazing blankly out at the bird feeders, reading crime novels, and watching television.

Sent a draft in to my editor a few days ago, and I've come up for air. When I came up, there was this media controversy about a really awful bit of "reality" TV (I know, I know . . . redundant!) called Duck Dynasty, which I only know anything about because our son made me watch it one night when we were visiting him in North Carolina like four months ago - way before the latest dust-up (which has consumed more ink and bandwidth than all that silliness about economic collapse, the surveillance state, climate change, mass extinction, and war).

Even then, the program was painfully stupid and offensive, though it hadn't yet hit the dual trip wire of homophobia and the hoary white Southern historical revision of race relations (of happy Negroes in the age of Jim Crow).

Believe me, I understand these trip wires, and I am grateful that they exist in the wake of decades long struggles by the victims of this bullshit to make them worthy of outrage. It means we have learned something as a culture, even if we haven't learned it all the way yet. The controversy demonstrates exactly this state of incomplete learning; but the good news is, these particular kinds of blanket dismissals of people who have had the hell beat out of them - figuratively and literally - are not Just Okay.