Caligula on the Hudson

Trump and the Erasure of the Republican Party 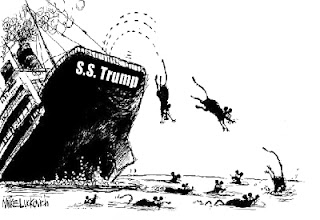 Like a child-king incapacitated from a lifetime of indulgence by bullied servants, Donald Trump is quickly ripping the Republican Party asunder. His sinister calculations, aimed by a coterie of crackpot advisers at being America’s own Duce—like the neocon Bush-clique fantasies of democratizing the oil patch for Yankee capital—has had its opposite effect. The party he commandeered through a hostile takeover during last year’s election follies has technically won both houses of the federal legislature and the executive branch; but contrary to capitalizing on that newfound power, it is metamorphosing into a political calamity.
Read more »
Posted by Stan at 11:26 AM 2 comments:

Like 9-11. Levittown. Nagasaki. Kristalnacht. Kennedy Assassination. 2007 Crash. 2003 Iraq Invasion. All these black swans, historical pivot points. Punctuation marks on the narrative that replaces memory as history. Is this gonna end up being a thing now? Charlottesville? Another punctuation mark on our wretched history? 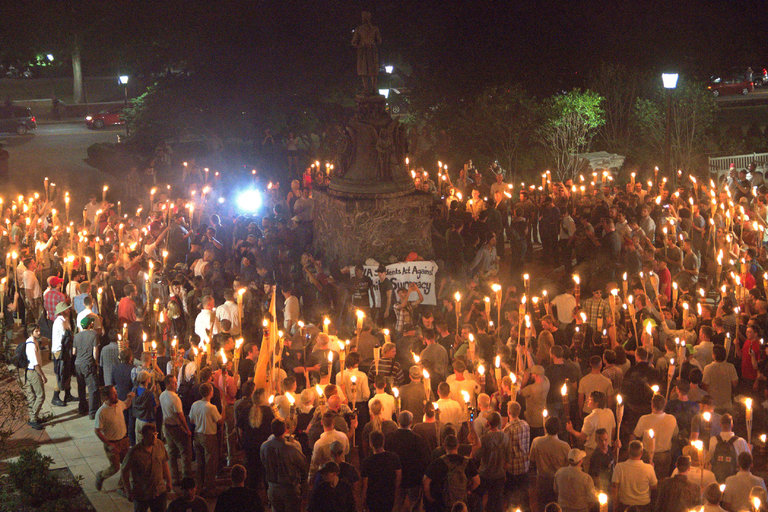 These are fearful times. Donnie has discovered there are nukes in the closet, and he wants to boardgame with them in Korea. And his alter -- Kim Jong Un -- seems to be as possessed by masculine blustering as Agent Orange. Really, y'all. This is for-real pretty scary. And what's motivating the process right now is probative masculinity.

Apparently White Nationalists are rampaging through the city, confronting counter-protesters, some peaceful, some provocable, some likely themselves provocateurs. And there have been some knock-down, drag-out fights. The cops -- by all accounts -- find themselves in deeper waters than they've ever experienced, and the city has been declared a state emergency to increase police presence. These reactionary gangs headed straight for confrontations with Black Lives Matter, who rightfully increased their general state of vigilance. One account says the thing began over anger at the upcoming removal of a statue of Robert E. Lee. Now it has spread over town

Will this happen more and more? I have no way of knowing, of who these people are, how they are organized, whether this is a blip or the beginning of a pattern. I know that probative masculinity traverses the political spectrum plotted from right to left. And boys want to prove their masculinity by fighting. The White Nationalists have hardly been subtle about their desire for war. The seek to be in a state of warfare, because they imagine this is how to get the gaze of approval from their idol -- masculinity. Lefty boys (and a few girls) fighting righty boys (and a few girls) is a win-win for fighty boys. Strike a pose. Having said this, the violent confrontations are picked up and amplified by media, giving an untrue impression about the overall character of the opposition.

I fear the reactions to these provocations nearly as much as I fear the provocations themselves. I pray that they are self-limiting, that we are still sufficient in numbers and moral will to dissolve them, like phagocytes. Because fight boys are drawn to conflict as much out of a desire for masculine esteem as by any real desire to defend. Incredibly narcissistic, yes, but there you have it. That impulse to prove oneself A Man . . . jumps right up in front of boys, from long training, and it is a wee bit Pavlovian.

So maybe "Charlottesville" will become the first act in a continuing and progressively more dreadful play. Maybe we've passed some point of no return, and the worst is already in train. Maybe Donald Strangelove will disappear "Charlottesville" inside the mushroom clouds of tactical nuclear weapons.

Or maybe we will look back, in five years or ten, and remember "Charlottesville," the name of a memory with many interpreters, a cultural Rorschach test, freighted with bitter grief. The first act in a longer, sadder story. I pray it is not.