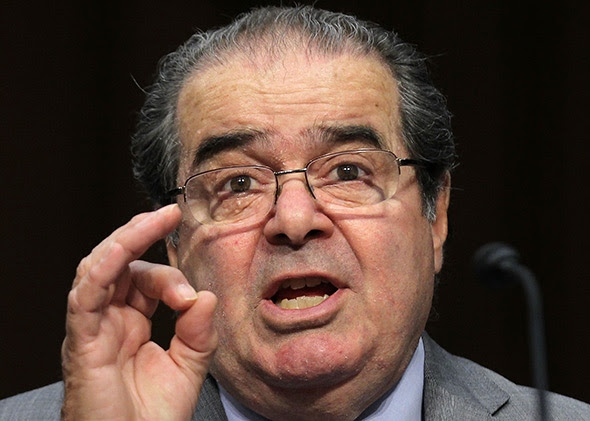 I profited from hatred. I won a small measure of notoriety from it, once as a soldier, again as a kind of semi-professional leftist. During the build-up for the Bush II invasion of Iraq, I penned an angry response to the intemperate remark, "Bring it on," by George W. Bush which went viral. Suddenly I was being invited to speak - getting paid to speak - all over the country, and even as far afield as Sydney, Australia. What people responded to with the greatest enthusiasm was not my recounting of the costs of war, but when I channeled their rage. Mobilizing the tears at the horror was the preface to activating hatred. To the question that Alex Cockburn asked, "Is your hatred pure?" I could answer boldly, yes. My best applause line was, "Yes, Saddam Hussein is a cheap gangster . . . but so are George W. Bush ad Dick Cheney." Referring to Bush as "that piece of shit in the White House" was also a crowd pleaser.

I'm not saying the actions of Bush and Cheney, and of Scalia, were not contemptible. I'm saying that I was not motivated by peace in my opposition to that war - one which continues to this day, and which is just as contemptibly sustained by the Democrat in the White House. As a leftist, one of the 'real' revolutionaries (no martial masculinity there), I was myself at war. I just believed I had the right enemies. What I loved was merely the foundation upon which I constructed my anger - exactly the way the plot unwinds in your typical male revenge fantasy at the movies. The sentimentality at the beginning was just a set-up for the real action, when the protagonist later redeems the world through violence.

I worked for a time with veterans 'peace' groups, within which there were genuine pacifists, but also many like me - who were against imperialism, and whose pacifism only extended to our own imaginary borders. At the endgame of my leftist schema was revolutionary civil war, imagined as a great rising and cleansing.

Shared by some women as it is, it is still an essentially masculine fantasy, this redemptive violence. And it is easy to understand if you are a former soldier who has seen the veil torn away, easier still if you are someone who is on the wrong end of the manifold injustices that define the world controlled by the principalities and powers. It is easy, even inevitable, to imagine relief, and even revenge, through violence, if you are among the jailed, the silenced, the beaten, the raped, the exploited, the humiliated of that world.

And the devil said to him, “To you I will give their glory and all this authority; for it has been given over to me, and I give it to anyone I please.


Unfortunately, it is also easy, especially if that humiliation filters into consciousness through layers of mystification, rationalization, and self-delusion, to aim that hatred, and even violence, at a convenient target. Who among us has not taken out our anger on the wrong person at times? Who among us has never passed along abuse to one who is weaker when we cannot confront abusers who are more powerful?

Just as unfortunately, it is easy to typify our imagined enemies, to caricature them, to imagine them as degraded in order to imagine ourselves as exalted, evolved, more sophisticated, as morally superior. I have lost count of the number of times I have seen those facebook passalongs that make fun of the misspellings of an enemy caricature. Look at this uneducated redneck! And there is the subtext: look at me, the educated one. Let's hate the redneck together.

How can we possibly belong without the boundaries between us and them? Let's fortify them, militarize them, strengthen the walls through the weaponization of our language.

We love to hate; and that is precisely why the devil can confidently say that all authority is given over to him.

The hateful outbursts that came across the facebook feeds with the announcement of Scalia's death were based on that old saw, "He had it coming!" I won't divert but a moment to point out that if death is punishment, then we all must have it coming. But the point people are trying to make - I created a minor controversy by saying we oughtn't celebrate the death of others - is that once someone has sinned - and Scalia sinned boldly - then there are no limits on the abuse we are allowed. We no longer have to consider the man's family (I have family members that I love who hold perfectly awful ideas), or even the sad fact that the man died without another chance to change. If I had died thirty years ago, I would have died with the blood fresh on my own hands. It's okay, the facebook logic goes, to spew hatred because he caused misery by his actions. Our verbal venom is a form of justice.

But it is not; and that is why I believe I have to pray for those who are linguistically kicking a corpse to demonstrate their progressive bona fides. Not because I am different than them. I am exactly like them. I once belonged to a group of men who literally sliced the ears off our dead enemies. And we were morally degraded by our actions.

Kicking the corpse is not justice; it is a self-indulgent reiteration of our desire to belong, to be on the inside of a strategic redoubt - to be us and not them. And in that, once the ideologies are stripped away, we are just as exclusive as that 'uneducated' racist. We are just as much at war, just as much committed to destruction instead of redemption.

I know I am. I don't want to love an enemy. Every cell in my body aches to lash out.

Note please, I am not saying there is no place for rebuke, for criticism, for hard truth-telling. These are not only acceptable, they are crucially important, utterly necessary. I am saying that this kind of gratuitous linguistic violence, that gives voice to our imaginations of actual violence, which we believe is redemptive, is the imagination of a lie. There are many ways to justify violence, especially in self defense. And before we judge certain kinds of violence, we are obliged to understand the terrible conditions that can provoke it. The lie is that you can actually commit that violence without being changed by it, lessened by it, damaged by it.

I had to take a hard look at myself a few years back, and I found something frightening. In the absence of an enemy, I was almost nothing at all.
Posted by Stan at 7:49 AM